A Queen of England, a Queen of Chile and the Armada Portrait

In 1554 Mary I, Queen of England married Philip of Spain, son of King Carlos V. In celebration of the marriage Philip was given the title of King of Chile, and hence Mary became Queen of Chile. This lasted until 1556, when as Philip II, he became King of Spain, and Chile was subsumed back into the Spanish monarchy, whilst keeping its honorific title of Kingdom of Chile.* 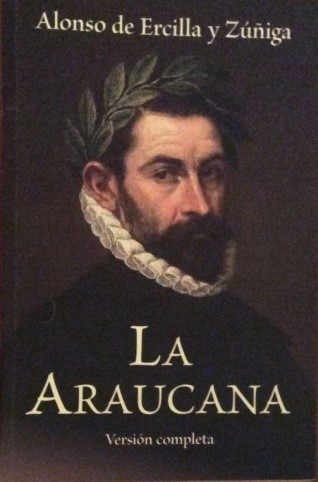 Accompanying Philip to the marriage celebrations in London was a page, Alonso de Ercilla y Zúñiga (1533-1594).*  Whilst in London, Ercilla  was inspired by the tales of Gerónimo de Alderete of adventures in the New World. In October 1555 he joined Alderete on an expedition  to Chile. As a soldier poet,  Ercilla’s  great epic poem La Araucana, first published in full in 1590, documents the conquistadors in Chile and the fierce resistance by the indigenous Mapuche people.*

Described as one of the greatest resistance wars in history, echoes still resonate today in Chile. Cervantes considered Ercilla to be one of the most talented poets of Spain,* and for the country  La Araucana  is an important document, both for its literary quality and its historical accuracy and portrayal of early Chile.

Also in 1555, Pedro Sarmiento de Gamboa (1532-1592) sailed for the New World. Growing up in Pontevedra, Galicia, in northern Spain, close to the point of the start and finish of the voyages of Columbus, Sarmiento became one of the leading explorers and navigators of his day. Sarmiento travelled extensively in what is today Mexico and Peru. He wrote a definitive account of the Incas, compiled through systematic interviews with local leaders and laws, and before finalisation included an unprecedented public reading to the indigenous authorities for comment and correction.*  By 1564 he had fallen foul of the Inquisition, including for use of astronomical rings, likely to have been navigation aids.*

In 1578 the Spanish were concerned by the frequent attacks by Sir Francis Drake, along the South American coastline. In 1579 Sarmiento was charged by the ViceRoy of Peru to undertake a voyage of exploration to find new locations for possible garrisons to counter the English attacks, and to claim territory for the Spanish Crown. Caught in a storm on 21 January 1580, Sarmiento’s ship Nuestra Señora de La Esperanza entered the Magellan Straits, emerging 34 days later on 24 February 1580. This was the second voyage to traverse the Straits from west to east and Sarmiento was the first to make a detailed survey and observations.* 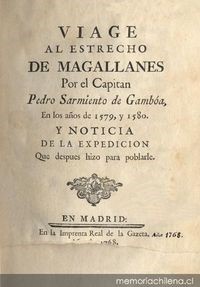 Sarmiento reported the results of the expedition to Philip II and recommended strengthening the defence of the Straits. In 1581 the King sent an expedition of 24 vessels with 2500 men, under the command of Diego Flores de Valdes. The aims were several – to transfer men to the Straits, to bring the new Governor of Chile. Alfonso de Sotomayor, and to bring a battalion of soldier to fight the war in Araucania.* 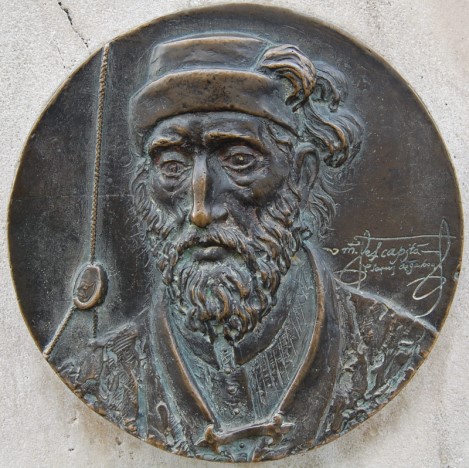 8 vessels were lost in a storm, 12 turned back to Spain at the entry to the Magellan Straits. With the remaining 4 vessels Sarmiento continued and on 5 February 1584, Sarmiento disembarked 300 men and founded the first settlement on Magellanic terrority, known as Nombre de Jesus. On 24 March, he founded a coastal garrison, known as Puerto de Don Felipe Rey, in honour of King Philip II.

Sarmiento de Gamboa sailed for Spain in 1584, and the garrison failed shortly after he left. He spent nearly year in Rio, seeking help for the community he had helped found in the Straits of Magellan. In January 1585 he took passage in a Brazilian ship bound for Spain to ask for the personal intervention of Philip II.  His capture en route, meant this never happened. In 1587 Thomas Cavendish, one of the English ‘pirates’ landed and found the garrison had nearly all starved to death and renamed it* Port* Famine.* As recorded in the diary of Charles Darwin, the highest mountain in Tierro del Fuego is named in memory of Sarmiento and his bravery, against insurmountable odds.* 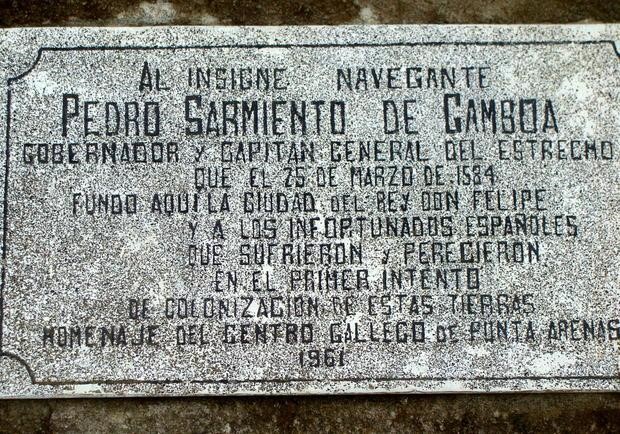 The commemorative plaque reads: “To the illustrious navigator Pedro Sarmiento de Gamboa, Governor and Captain General of the Straits who on March 25, 1584, founded here the city of Rey Don Felipe, and to the unfortunate Spaniards who suffered and perished in the first attempt to colonize this land. A tribute of the Galician Centre of Punta Arenas, 1961.

Sarmiento de Gamboa was captured near the Azores, in August 1586,  by Jacob Whiddon and  three English corsairs in the service of Sir Walter Raleigh. He was taken to Plymouth, England, arriving in September 1586, and then to London.* 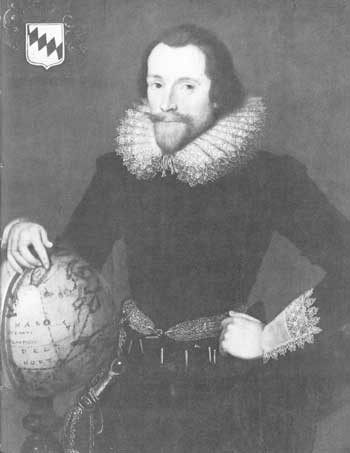 Sarmiento was received with great courtesy by Sir Walter Raleigh and Queen Elizabeth I (sister and successor to Mary 1). This was in recognition that Sarmiento was one of the greatest navigators and sailors of Spain. It is reported that Sarmiento and the Queen conversed in Latin, as a common language, for two and a half hours.  He was received as well by Lord Burghley, the advisor to the Queen, and by Admiral Lord Howard, by whom he was asked to convey a verbal message to King Philip of Spain, as a basis for negotiation* and reconciliation.*

Sarmiento spent two months in England and is believed to have met with explorers and astronomers, and shared information with the English on the Southern Seas. His mark is said to be on the Molineux Globe, the first to be made in England; and on a map by Edward Wright, published in 1599 which corrected the form of South America. An annotation on the map stated:*

By the discoverie of S. Francis Drake made in the yeare 1577, the Streights of Magellane, as they are comonly called, seeme to be nothing els but broken land and islands; and the southwest coast of America called Chili was found not to trend to the northwestwards as it hath beene described but to the eastwards of the north as it is heere set domne, which is also confirmed by the voyages and discoveries of Pedro Sarmiento and M. Tho. Candish Aº 1587

Sarmiento was charged with taking a ‘message of peace’ from Queen Elizabeth I to King Philip II of Spain. This is described in a letter from the Ambassador of Spain in France, Bernandino de Mendoza  to King*Philip*II:* 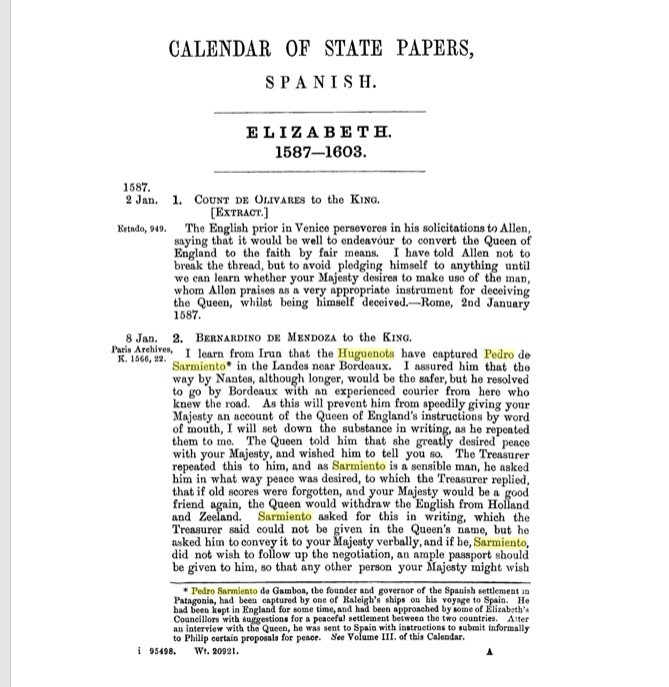 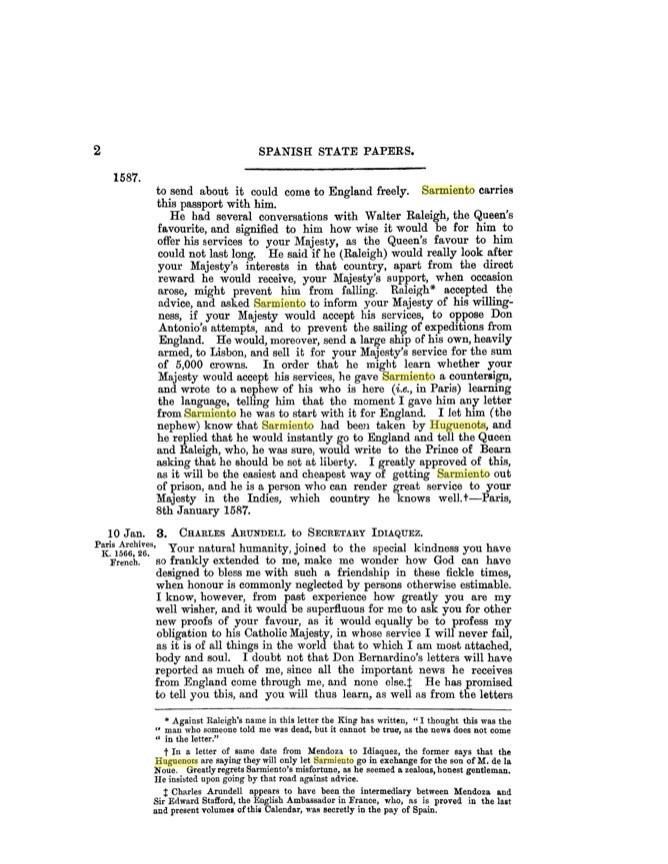 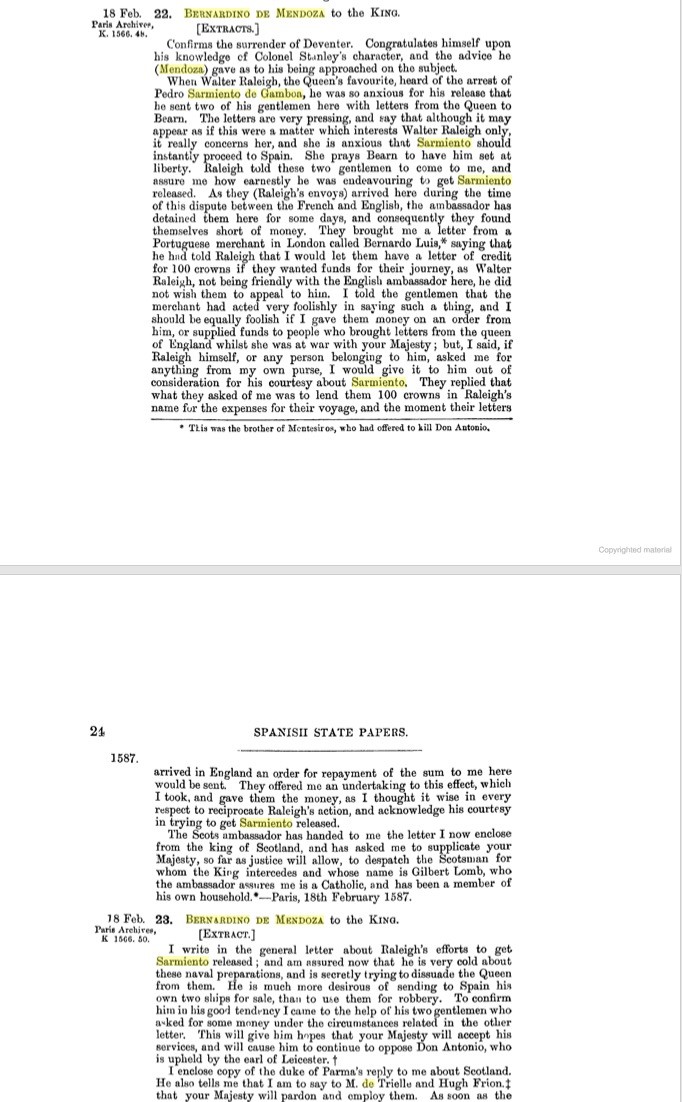 During his journey to Spain, Sarmiento was captured by French Huguenots, and imprisoned in Mont de Marsan for three years, until the middle of 1590. This was despite requests for his release from the Queen, Raleigh and others.  On his release he returned to Spain. He subsequently wrote to Lord Burghley, the advisor to Queen Elizabeth, thanking him for his* help.* 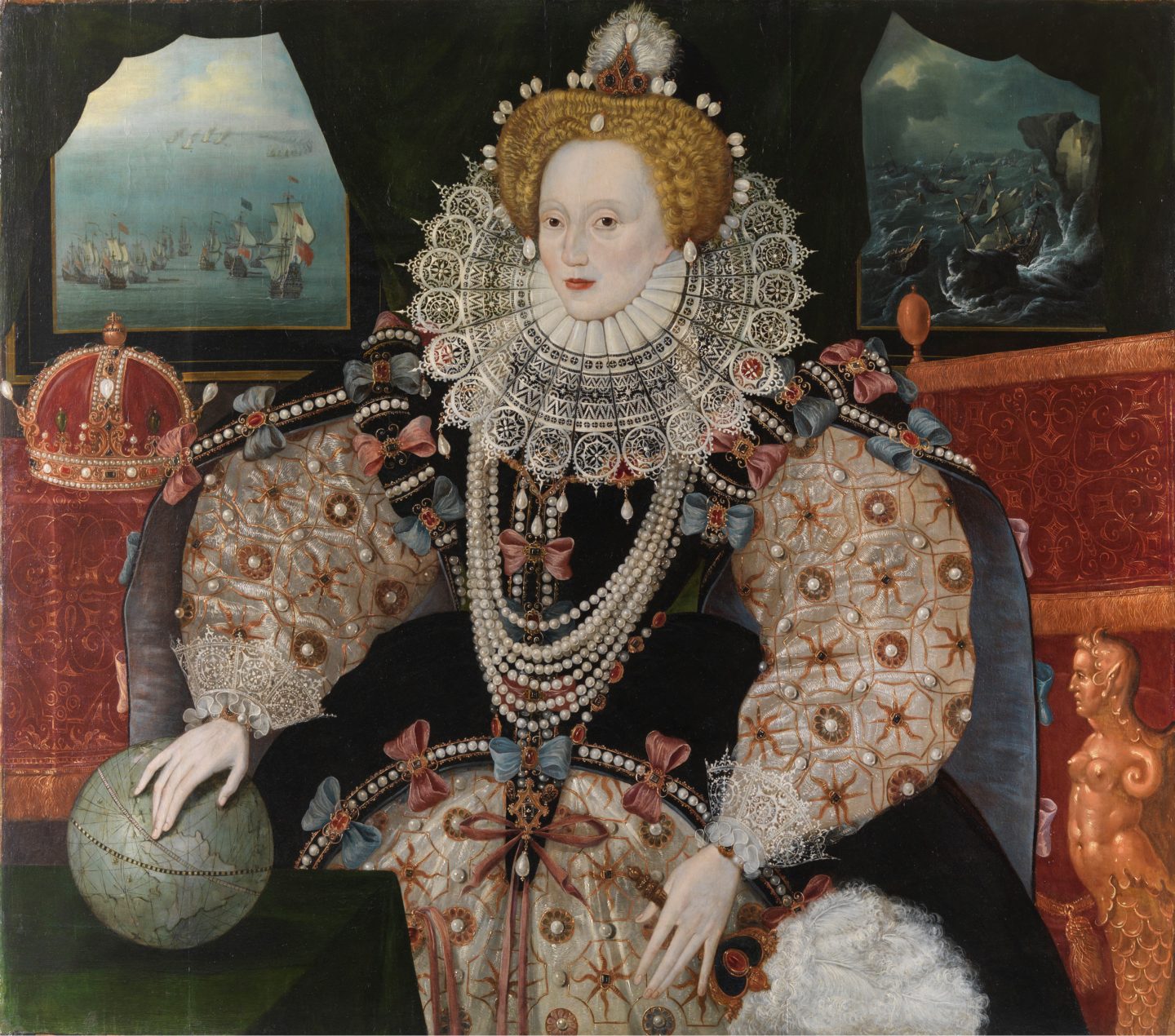 The ‘Armada Portrait’ of Queen Elizabeth I, three-quarter-length, in a richly gold-embroidered and jewelled dress, her left hand holding a feathered fan, her right resting on a terrestrial globe, an imperial covered crown on the table beside her, with two views of the sea beyond: at left, the English fleet with the approaching Spanish Armada; and the Armada wrecked on the British coast, in a stormy sea, at right. On display at the Queen’s House, Greenwich. © National Maritime Museum, Greenwich, London

Meanwhile the Armada had launched, with catastrophic consequences. Had Sarmiento’s mission been successful in delivering the message from the Queen to Philip II of Spain, perhaps the war could have been averted, the course of history in Europe, and in Latin America, would have been changed. One of the most important paintings in British history – the Armada portrait, would not have been painted in 1590. The great symbol of England and maritime power, and saved for the nation in 2016, and following conservation work, rehung in The Queen’s House, Royal Museums, Greenwich on 13 October 2017.